Black Death Mortality not as Widespread as Long Thought 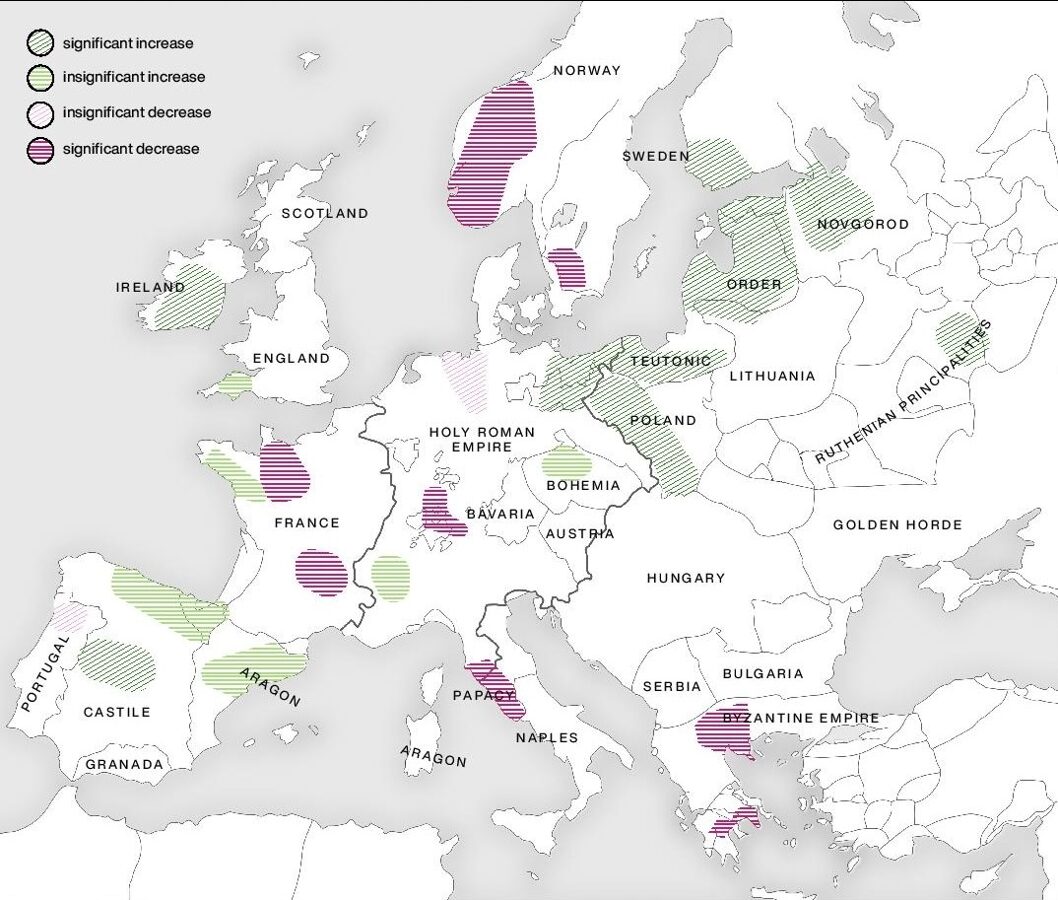 Pollen data from 19 modern European countries reveals that although the Black Death had a devastating impact in some regions, parts of Europe experienced negligible or no impact at all.

A new study in the journal Nature Ecology and Evolution uses pollen data to evaluate the second plague pandemic’s mortality at a regional scale across Europe. Results show that the impacts of the Black Death varied substantially from region to region and demonstrate the importance of cross-disciplinary approaches for understanding past – and present – pandemics.

The Black Death, which plagued Europe, West Asia and North Africa from 1347-1352, is the most infamous pandemic in history. Historians have estimated that up to 50% of Europe’s population died during the pandemic and credit the Black Death with transforming religious and political structures, even precipitating major cultural and economic transformations such as the Renaissance. Although ancient DNA research has identified Yersinia pestis as the Black Death’s causative agent and even traced its evolution across millennia, data on the plague’s demographic impacts is still underexplored and little understood.

Now, a new study in Nature Ecology and Evolution demonstrates that the Black Death’s mortality in Europe was not as universal or as widespread as long thought. An international team of researchers, including Normunds Stivrins and Nauris Jasiunas from the University of Latvia and other researchers from the whole Europe, led by the Palaeo-Science and History group at the Max Planck Institute for the Science of Human History, analyzed pollen samples from 261 sites in 19 modern-day European countries to determine how landscapes and agricultural activity changed between 1250 and 1450 CE - roughly 100 years before to 100 years after the pandemic.  Their analysis supports the devastation experienced by some European regions, but also shows that the Black Death did not impact all regions equally.

Palynology, or the study of fossil plant spores and pollen, is a powerful tool for uncovering the demographic impacts of the Black Death. This is because human pressures on the landscape in pre-industrial times, such as farming or clearing native plants for building, were heavily dependent on the availability of rural workers. Using a new approach called Big-data paleoecology (BDP), the researchers analyzed 1,634 pollen samples from sites all over Europe to see which plants were growing in which quantities, and thereby determine whether agricultural activities in each region continued or halted, or if wild plants regrew while human pressure is reduced.

Their results show that the Black Death’s mortality varied widely, with some areas suffering the devastation the pandemic has become known for and others experiencing a much lighter touch. Sharp agricultural declines in Scandinavia, France, southwestern Germany, Greece and central Italy support the high mortality rates attested to in medieval sources. Meanwhile many regions, including much of Central and Eastern Europe and parts of Western Europe including Ireland and Iberia, show evidence for continuity or uninterrupted growth.

“The significant variability in mortality that our BDP approach identifies remains to be explained, but local cultural, demographic, economic, environmental and societal contexts would have influenced Y. pestis prevalence, morbidity and mortality,” says Alessia Masi from the MPI SHH and La Sapienza University in Rome.

No single model of the pandemic

One reason these results come as a surprise is that many of the quantitative sources that have been used to construct Black Death case studies come from urban areas, which, despite their ability to collect information and keep records, were also characterized by crowding and poor sanitation. However, in the mid 14th century, upwards of 75% of the population of every European region was rural.  The current study shows that, to understand the mortality of a particular region, data must be reconstructed from local sources, including BDP as method for measuring change in cultural landscapes.

“There is no single model of ‘the pandemic’ or a ‘plague outbreak’ that can be applied to any place at any time regardless of the context,” says Adam Izdebski, the leader of the Palaeo-Science and History group at the MPI SHH.  “Pandemics are complex phenomena that have regional, local histories. We have seen this with COVID-19, now we have now shown it for the Black Death.”

The differences in the Black Death’s mortality across Europe demonstrates that the plague was a dynamic disease, with cultural, ecological, economic and climatic factors mediating its dissemination and impact. Moving forward, the researchers hope that more studies will use palaeoecological data to understand how these variables interact to shape past – and present – pandemics.